I’ve been curious about Burda Style patterns for a while now, but it took me awhile to figure out what they were and where to find them.  In fact, it took me awhile to figure out this was a regularly published fashion magazine that featured the patterns to sew the clothes featured.  I somehow came across one of these patterns when I was looking for a skirt to make that would go with some plaid rayon blend I had just recently bought.  You actually can get individual pdf patterns on their website, but since I’m a bit overwhelmed with putting together a pdf pattern (have not attempted this yet!), I thought purchasing the magazine would be better for me.  Plus there would be other patterns as well!

I’m not sure what I expected when I got the magazine, but when I pulled out the pattern section… 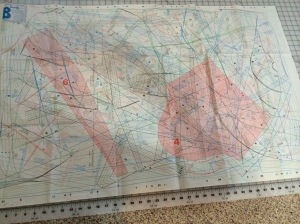 Yikes, it looked like an astronomy map.  How was I going find my skirt?  Burda is nice enough to tell you which sheet the pattern is on along with some confusing directions on how you can find the item you are looking for.  For example, this pattern also shared pattern lines with another skirt and all I had to go with was some cryptic directions.  My mom and I spent almost an hour trying to trace the line for the skirt, only to realize we had wandered over to another pattern.  We just couldn’t figure out where the right line was.  I read the directions over and over…”cut piece 1 apart on the dart lines.”  Why didn’t my pattern piece look anything like the drawing?  Then I realized, they literally meant to cut the piece apart at the dart lines so that the pattern piece labeled 1, was actually two different pattern pieces.  Ahhhh!  Then I assessed from the drawing that the two pattern pieces (both labeled 1) were actually the front yoke and the sides yokes.  WHY DIDN’T IT JUST SAY THAT IN THE FIRST PLACE!!

Once you trace all the pieces for the yoke, you are then told to construct your own circle skirt.  They give you a diagram with measurements to follow.  At this point, I’m thinking I could have just drafted this whole thing myself.

I knew that I would have to adjust the pattern size to make a slightly bigger skirt. I added on a bit to the yoke and then measured to make sure the diameter of the circle skirt would fit.  I also decided to shorten the yoke so the circle skirt part didn’t sit so low on the hips.  This was recommended from others that have made this pattern and also made sense when I held the yoke pattern up to me.  I didn’t want the yoke to fit over the entirety of my hips with the skirt flaring out below my butt.  I had weird visions of it looking like some sort of weird inverted umbrella.

Okay time for the directions, which consisted of a few sentences.  Clear as mud.  It was almost as if they translated them into some other language and then back to English.  Another problem was it called for some sort of fusible bias tape.  I ordered some on Amazon before I realized it was shipping from Germany.  When I finally got it in the mail – this is what it looked like:

If I had sneezed when I opened the envelope, it probably would have disappeared.  It didn’t even come with a packing slip.  Oh well, it was enough to fit around the waist of the skirt and it actually worked quite well.

I found some soft purple lining material in my fabric stash, which I used to line the skirt yoke.  After I had figured out the directions, it all came together pretty well.  The only problem was I had added on too much to the skirt, which I didn’t see on the first fitting.  I took in the yoke pieces, which meant I also had to adjust the diameter of the skirt.  There was a lot of trial and error since I had such trouble getting them to be the same size.  When I finally accomplished this, so that there were no bunches in material when the skirt was attached, I tried it on for the last time.  It was still a bit too big.  Hmmm…maybe I am not as fat as I think I am?

There were no directions on hemming the skirt and since I didn’t really feel confident in my first attempt at hemming a circle skirt after so many other failures with this project, I just serged the edge all the way around at the bottom. 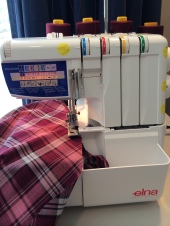 I actually like the way this looks since the skirt is on the casual side and I was able to use some nice maroon thread that complimented the plaid.

Well it’s far from a perfect fit, as it’s a little low on the hips, but with this shirt it’s doable.  And at least I can say I tried a Burda Style pattern.  It may be awhile until I start another one, but who knows.

Also, interestingly my sister saw the skirt and immediately said, “This reminds me of Empire Records.”  Hmmmm – I did some searching on the Internet and… 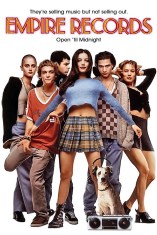 Look at that!  Wow I really remember loving Liv Tyler’s look in this, back in the 90’s.  Especially that cropped sweater.  I do wonder if this skirt was a way for me to re-live some part of my youth…maybe that’s a bit too deep.

Well I tried it – how about you?

7 thoughts on “I tried it! Burda style pattern”