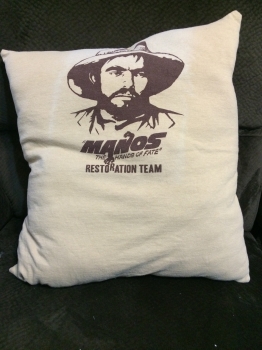 The origin of this project is a funny story.  My friend recently brought over his old ripped t-shirt, one of his favorites (don’t worry he has a back up).  I asked him why he was bringing this thing to me.  He said, “I brought it over because you said you could use this for a project.  You were going to make something out of it.”

I had no memory of this conversation.   We both wondered if this conversation really did take place or if it was some strange dream he had.  But it was possible I had said I could re-purpose it….I started racking my brain.  What could I make with an old t-shirt with un-repairable rips in the seams?

I know people like to make t-shirt quilts, but I am definitely not a quilter.  And I don’t think you can make a quilt from one t-shirt.  I looked at the square shape of it and then it came to me – I can make this into a pillow!  It would have new life as a home object.  And a conversation piece….of sorts.

In case you were wondering what the hell this creepy t-shirt is, it’s from an extremely bad movie called “Manos” The Hands of Fate.  If you are not a fan of the 90’s show Mystery Science Theater 3000, as I am, you probably have not ever heard of this movie (although there was a reference to it on the TV show How I Met Your Mother).  Recently there was a conversation at my work about what the worst movie in history was.  Many people think it’s the Ed Wood classic Plan 9 from Outer Space.  However, as I informed my boss, Manos has been recognized as much much worse.  You can learn some fun facts about the move here and here.  I do not recommend watching it straight, but watching the MST3K episode or with a few comedic friends is okay.

Back to the pillow assembly, which was really quite simple.  I cut the arms and neck bank off, and trimmed the sides around the rip.  I decided to use a serger since I was already using it for something else, and I thought it could help with straightening the seams.  Obviously I serged it with the right sides together, leaving a space so I could flip the pillow right-side out and stuff with some fiberfill.  I wanted to stitch up the hole in a way you couldn’t see the hand-stitched seam, so I did some research on ladder stitches, usually used for this purpose.  Here is a handy page I found with helpful diagrams out how to do one properly.  You first fold the sides in to create the seam.  Then starting at one side (after you secure the stitch), you put the needle through about 1/4 inch of fabric on the other side, then through 1/4 inch of fabric on the other (original) side.  The stitch is hidden, which gives the seam a more uniform look. 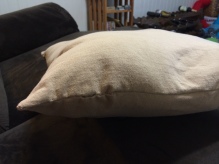 So there you have it, a great way to save an otherwise ruined t-shirt.  Now to figure out a way to not have Torgo staring at me all the time.  It’s really starting to creep me out. 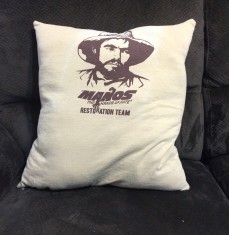 What other fun things have you made with old t-shirts?

4 thoughts on ““Manos” The pillow of fate – or what can you do with an old ripped t-shirt?”